Some of J CUBE publications, including research papers, posters, technical memos and presentations.

We believe in the thinking and validation process of research as a fundamental aspect of development: whenever possible, we like to publish some of our ideas in a structured and formalized way, for the benefit of the community. 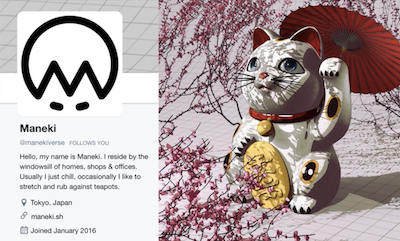 This is a recorded keynote presentation about Maneki® and "Photo Surreal Rendering" (PSR). Maneki® is the core technology created by J CUBE and used for the first time on the high quality Anime movie BLAME!, which was released in the theathres in Japan on 20/05/2017 and concurrently on Netflix worldwide. The original presentation was originally recorded live, in a much shorter time (~10 minutes), by Paolo Berto Durante of J CUBE Inc. on NicoNicoVideo (a very large video sharing website of Japan). 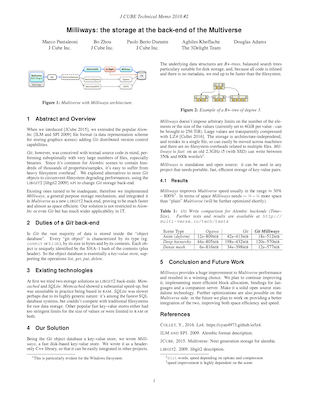 Milliways — The Storage at the Back-end of the Multiverse

With Multiverse we extended the popular Alembic file format by adding Git distributed version control capabilities. Git howerver was conceived with textual source code in mind, performing sub-optimally with very large numbers of files, especially binaries. Since it’s common for Alembic scenes to contain hundreds of thousands of properties/samples, it’s easy to suffer from heavy file-system overhead. We explored alternatives to store Git objects to circumvent file-system degrading performances, using the LibGit2 API to change Git storage back-end. Existing ones turned to be inadequate. Then we implemented "Milliways", a general purpose storage mechanism, and integrated it in Multiverse as a new LibGit2 back-end, proving to be much faster and almost as space efficient. Our solution is not restricted to Alembic or even Git but has much wider applicability in IT. 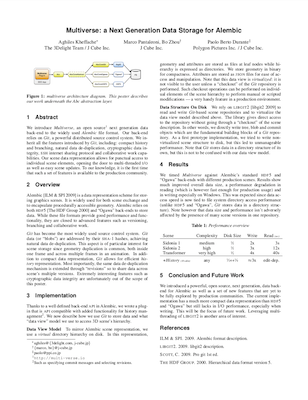 We introduce Multiverse, an open source, next generation data back-end to the widely used Alembic file format. Our back-end relies on Git, a powerful distributed source control system. We inherit all the features introduced by Git, including compact history and branching, natural data de-duplication, cryptographic data integrity, SSH internet sharing protocol and collaborative work capabilities. Our scene data representation allows for punctual access to individual scene elements, opening the door to multi-threaded I/O as well as easy scene updates. To our knowledge, it is the first time that such a set of features is available to the production community. 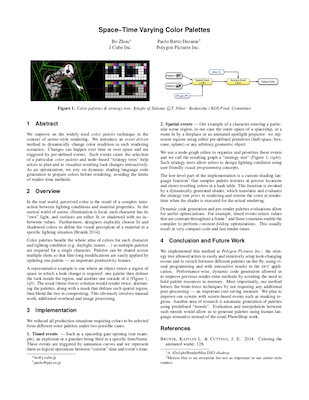 We improve on the widely used color palette technique in the context of anime rendering. We introduce an event-driven method to dynamically change color rendition in such rendering scenarios. Changes can happen over time or over space and are triggered by pre-defined events. Such events cause the selection of a particular color palette and node-based "strategy trees" help artists to plan and to visualize resulting look changes interactively. As an optimization, we rely on dynamic shading language code generation to prepare colors before rendering, avoiding the limits of render-time methods. 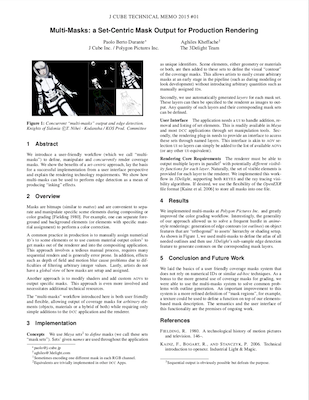 We introduce a user-friendly workflow (which we call "multi-masks") to define, manipulate and concurrently render coverage masks. We show the benefits of a set-centric approach, lay the basis for a successful implementation from a user interface perspective and explain the rendering technology requirements. We show how multi-masks can be used to perform edge detection as a mean of producing "inking" effects. The multi-masks workflow and technology is implemented in 3Delight and fully integrated in 3Delight for Maya and 3Delight for 3dsmax.